I started the Kerberos.NET project with a simple intention: be able to securely parse Kerberos tickets for user authentication without requiring an Active Directory infrastructure. This had been relatively successful so far, but one major milestone that I hadn’t hit yet was making sure it worked with .NET Core. It now works with .NET Core.

There is no automated way to port a project to .NET Core. This is because it’s a fundamentally different way of doing things in .NET and things are bound to break (I’m sure that’s not actually the reason). There is documentation available, but it’s somewhat high-level and not necessarily useful when you’re in the weeds tracking down weird dependency issues. Given that, you’re kinda stuck just copying over the code and doing the build-break-tweak-build-wtf dance until you have something working. This was my process.

Once I was able to get the test projects up and running I could run them through the test cases and verify everything worked correctly. Everything worked, except for the AES support.

Porting a Project with a Dependency

I added support for AES tickets a while back and it was built in such a way that it lived in a separate package because it had an external dependency on BouncyCastle. I’m not a fan of core packages taking dependencies on third parties, so I built it as an add-on that you could wire-in later. This worked relatively well, until I needed to migrate to .NET Core.

It turns out there are a number of Core/Standard/PCL packages for BouncyCastle, but what’s the right one? Weeeeelll, none of them, of course!

At this point I decided to suck it up and figure out how to make SHA1 do what I want. One option was to muck with the internals of the SHA1Managed class with reflection, but that turned out to be a bad idea because the original developers went out of their way to make it difficult to get access to intermediate values (there are philosophical arguments here. I don’t fault them for it, but it’s really frustrating). I considered rewriting the class based on the reference source, but that too was problematic for the same basic reason. Eventually I ended up porting the BouncyCastle implementation because it was relatively self-contained, and already worked the way I needed.

Security note: You should never trust crypto code written by some random person you found on the internet. That said, there’s a higher chance of finding a vulnerability in other parts of the code than with the port of this algorithm, so…

This actually works out well because now all the code can go back into a single package without any dependencies whatsoever. Neat!

The nuget pieces didn’t really change much, but now the manifest is defined in the project file itself, and packages are built automatically. 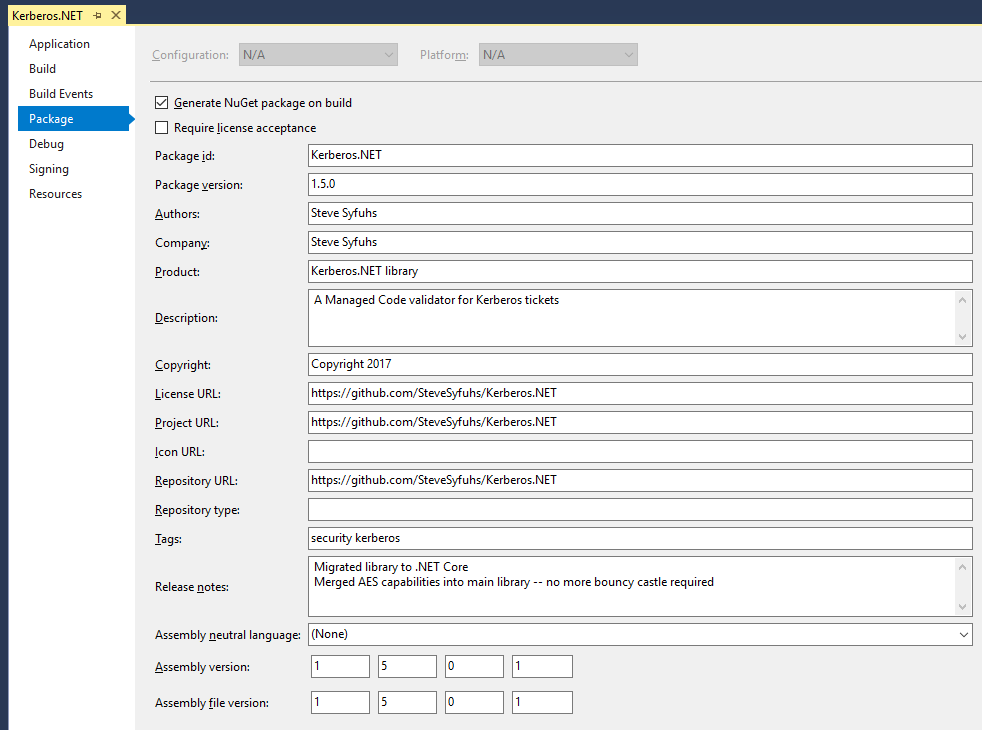 Now the package is just an artifact of the build, which will be useful if/when I ever move this to an automated build process.