If you’ve ever had an experience with Credential Providers in the past, you may think the title of this post is insane — it’s not.

I recently came across an interesting Github project that showed it was theoretically possible. I wanted to see if I could replicate the results myself without digging too deeply into how they did it. As it happens, I could.

I created a sample project that outlines how you can do it on Github: CredProvider.NET 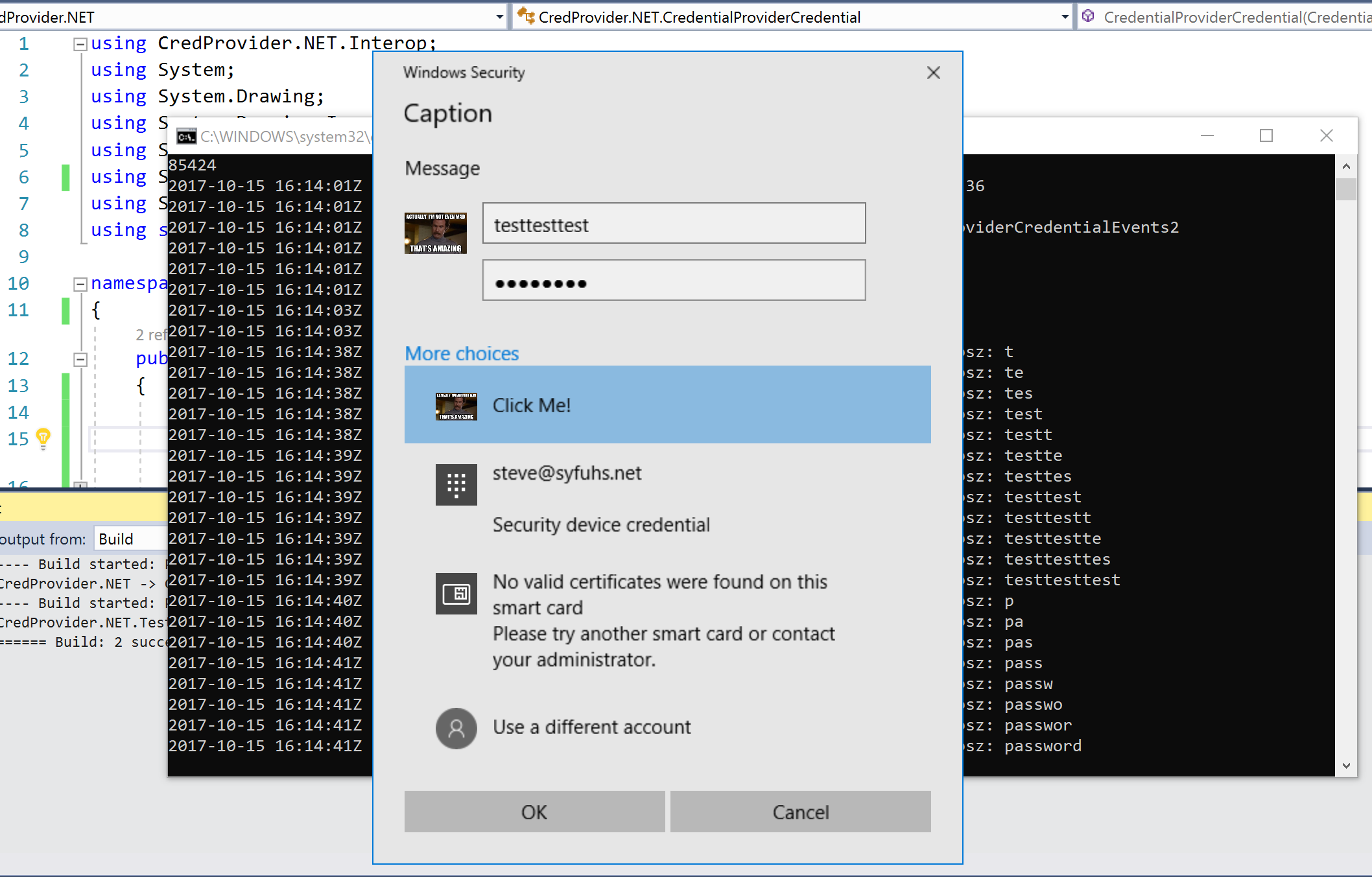 Historically, Credential Providers have been complex components to write because they’re COM-based, and because they have weird restrictions you have to contend with since they run in the winlogon UI process. Both of these restrictions should make any sane developer run away — doubly so if you’re a .NET developer. However, if you’ve been around long enough, you may remember that COM-interop thing that makes it possible to call .NET code from COM components (and conversely, call COM components from .NET) and have the runtime do a whole host of evil to keep the two relatively stable.

The trick with interop is getting the interfaces right. Everything communicates through interfaces — it’s the only way to guarantee a stable contract between APIs. This is the crux of our implementation. You can codify them manually through MSDN definitions, but that’s error prone and not necessarily completely accurate. Thankfully, the Windows SDK contains an IDL file that defines the interfaces we need. All we need to do is convert them to something .NET understands. We do this in a two step process where we first compile the IDL to a type library, and then convert the type library to a .NET assembly.

You can compile a type library using the midl.exe tool. You’ll need to install the Windows SDK first though, otherwise you won’t have the IDL file.

You can see I’m using the latest 10.0.16299.0 build of the SDK. This particular version requires you explicitly target a version for some reason — older versions of this IDL don’t require the targeting.

This produces a few files, but most notably is the credentialprovider.tlb file. This is the type library. We need to convert this to an assembly. Normally, you’d just use tlbimp.exe, but it’s notoriously opinionated on how you talk to COM, leaving you stuck in a few ways (for instance, it expects you to throw exceptions instead of returning HRESULTs, despite the interface requiring you to return HRESULTs). It turns out the CLR Interop team built a set of tools to help you through this pain — specifically tlbimp2.exe (why they didn’t just ship this capability in the original tool is a mystery).

The key is the /preservesig parameter.

Once you’ve created the assembly, you can import it into a project and start creating your credential provider.

Credential Providers are made up of two core interfaces:

There are a few related interfaces, but they are just there to enhance the capabilities of the credential provider. Once you implement your interfaces you need to decorate the class with some attributes to tell what’s exposed as COM implementations:

You only need to do this on the ICredentialProvider interface.

At this point you may notice a few annoying things. First, not all the interfaces are present in the assembly. A few interfaces were added in the Windows 8.0 timeframe, specifically the ICredentialProviderCredential2 interface, that allows you to follow the newer design guidelines. Second, some of the typedef’s don’t translate correctly. For instance, HBITMAP gets mangled. Fixing these issues requires a little surgery on the credentialprovider.idl file.

First, you need to move the library declaration to the beginning of the file. It’s already present somewhere in the middle of the file (search “library CredentialProviders”). Just move it to the beginning of the file so it includes all the extra interfaces. Second, find and replace any mangled pointer to HANDLE (e.g. HBITMAP* to HANDLE*). Now you’ll need to recompile with midl, and regenerate the library with tlbimp2.

You can see how I did it with this diff. 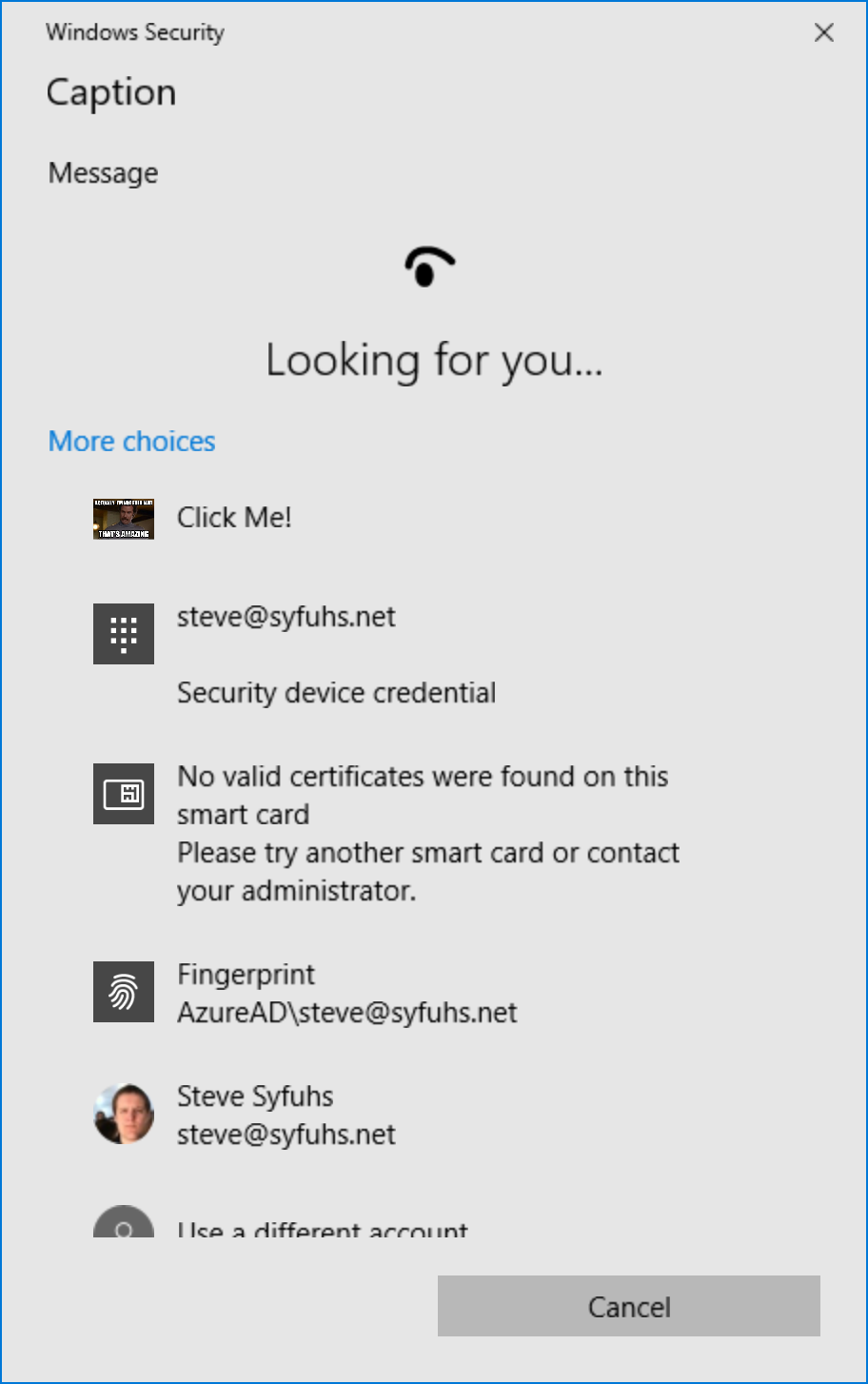 Unrelated, but you may notice a number of things were taken out. This is because I modified the file without making a backup (doh!), and had to search for the original online and could only find the first release (I suppose I could have just reinstalled the SDK, but that’s beside the point). Anyway, notice how there’s an ICredentialProviderCredential3? I suspect that’s how Windows Hello does the eye-of-Sauron graphic when it’s looking for you.

You may also want to explicitly register for COM interop on build too. This will make the provider available on each build, but the downside is that it requires running Visual Studio as admin.

You need to tell Windows you’ve got a Credential Provider once it’s registered. You do this by adding it to the registry.

Notice that the GUID matches the Guid in the class attribute. This is intentional. This tells Windows that the COM component with that given guid is a Credential Provider, and it should new-up an instance of it.

The other thing you’ll want to figure out is how to test this thing. You’ll notice all the images above show it being used within a user session, prompted via CredUIPromptForWindowsCredentials. This is intended because testing it on your own machine’s winlogon interface is an exercise in madness. Unhandled errors that cause your provider to crash will render the logonUI unusable and, well, you’re screwed. You have to boot into safe mode and remove the provider registration, but the provider is still loaded so you can’t log into safe mode! So you need to boot into recovery mode, and… — have you made a recovery image? Using CredUIPromptForWindowsCredentials will let you test your code easily and quickly, and it generally behaves like winlogon. Lastly, test it on a VM once it’s ready for more in depth testing.

And that’s all it takes to start writing a Credential Provider in .NET.

It’s worth noting that this is possibly (probably?) a bad idea. I don’t know how stable this will be in the wild.

I came across this Stack Overflow post in my attempts to figure out the ICredentialProviderCredential2 problem, which lead to this sample. Their recommendation to use tlbimp2 was a huge revelation.